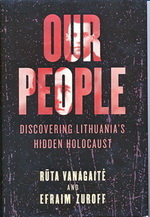 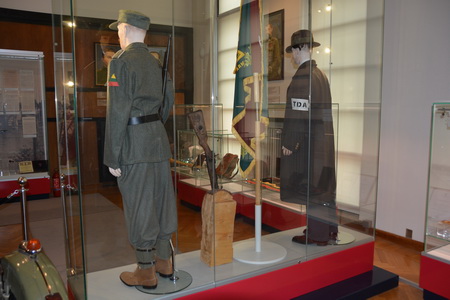 "Although there was, and is, a formal consensus that Jews were a part of Lithuania, this is not what ordinary people felt. For Lithuanians, the Jews were allways 'them'. " S. 218

Thank you for your letter.

As a publisher, I am always interested to receive opinions about books I've published, even if I’m a little surprised to receive them from a representative of a foreign state. Anyway, your letter is fine for me.

From the perspective of the Lithuanian citizen and author Ruta Vanagaite, though, I find your letter troubling. It could be interpreted as that the Lithuanian state is supervising and interfering in what their citizens are doing and saying abroad.

I consider Vårt folk/Our People to be a serious work, well worth to be published, in Sweden and in other countries. That is also an opinion I share, both with the Nobel Prize Laureate, Svetlana Aleksijevitj, who has written a foreword to the book, and with the Swedish reviewers of the book. Vårt folk/Our People has been reviewed favourably in several papers in Sweden, for example in Aftonbladet, the largest daily in Scandinavia, and Göteborgs-Posten, the largest daily in Western Sweden. Having said that, a further debate about the important topic of Vårt folk/Our People could of course only be welcomed.

Regarding your claim, that there are 'many moments in the book' that 'do not meet the historical facts', I'd be happy to receive more details about those 'moments'. In general, though, I believe that the best way to handle such a discussion is in an open public debate where also dissenting views are heard. What constitutes a certain fact, especially in controversial issues, is not always clear and may change over time.

Regarding the book fair in Gothenburg, the seminar with Ruta Vanagaite and Efraim Zuroff, is unfortunately cancelled, but I do hope the authors will be able to come to Sweden in the future. If they will, I'd be more than happy to arrange a debate together with the Lithuanian embassy in Stockholm! You could chose two persons to challenge the authors of Vårt folk/Our people. I will do my best to persuade the latter to participate and defend their book against their critics. I am sure that many people would like to attend a public debate like that!

Now, to your remarks about the website of my publishing house.

The other sentence you complain about, 'Hennes böcker rensas ut ur hela Litauen' (Her books are cleansed from the whole of Lithuania), happens to be the title of the article that was published in Dagens Nyheter (https://www.dn.se/…/hennes-bocker-rensas-ut-ur-hela-litauen/) and Hufvudstadsbladet (https://www.hbl.fi/…/hennes-bocker-rensas-ut-ur-hela-litau…/) in December 2017. In this article, by Anna-Lena Laurén, the cleansing of Ruta Vanagaite's books is described in a very detailed manner.